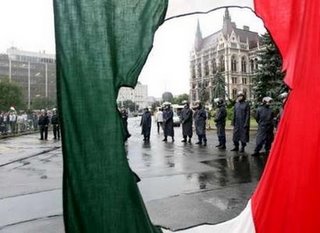 As you may already know from previous posts that I am Hungarian. Born in Budapest and escaped during the Hungarian Revolution in 1956. We are coming up on the 50th anniversary of the Revolution. I'm going to post some pictures and stories to honor that huge event in my life.

I'm kind of torn about this post because after all this is a knitting blog but it is my knitting blog and my world and opinions. The things I write about are events and subjects that interests me at the time. With this anniversary coming up a lot of emotions are stirred up for me. At the age of 14 my mother and father and I escaped from our home in Budapest. By January 1957 we arrived in sunny Southern California with $30 dollars and a change of clothes.

But first I need to talk about the Crisis happening in Hungary politically. I am so sad to see these pictures coming out of Budapest.. Thousands of people are out in the streets protesting and it turned violent, people died and many were injured. 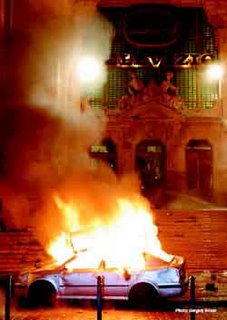 Democracy is relatively new in Hungary and I guess this is a huge "shock" to the Hungarians, the politicians lied! Having lived in the U.S. for all these years my reaction was yeah... and your point.... but to the Hungarians this is an outrage!

The last election the Socialist won and it was an upset, now it turns out that they lied, they lied morning, noon and night... anything to win the election and to be in power!

BUDAPEST, Hungary - Opposition parties Monday demanded the resignation of the prime minister after he admitted in leaked comments that his government had "lied in the morning, in the evening and at night" about the state of the economy. In a recording made in May and leaked Sunday, Prime Minister Ferenc Gyurcsany told deputies of his Socialist Party that they had to end their duplicitous ways. Gyurcsany said that Hungary had managed to keep its economy afloat only thanks to "divine providence, the abundance of cash in the world economy and hundreds of tricks." "I almost died because for a year and a half, we had to pretend that we were governing. Instead, we lied in the morning, in the evening and at night. I don't want to do this anymore," Gyurcsany is heard saying on the tape. President Laszlo Solyom said there was a "moral crisis" in Hungary and called on the prime minister to recognize that he had jeopardized people's faith in democracy. At the same time, hundreds of protesters remained outside parliament, also calling for Gyurcsany's ouster.

People are jerks sometimes. I'm so glad you and your family escaped. It must have been so hard to start over from scratch.

I hope things settle down peacefully soon in Hungary. I visited the country a few years ago, and really liked it. As a country, it's been through a lot!