My Husband made me a Swift... 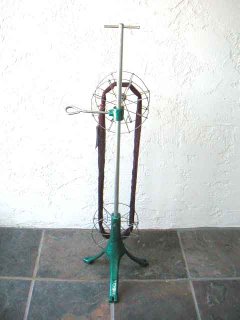 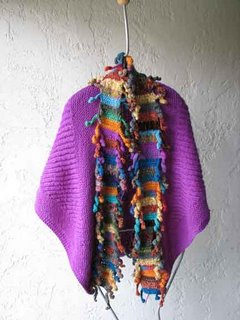 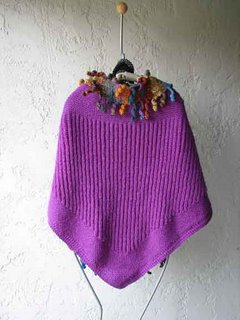 I started knitting this while I was away at a retreat in the Desert, (Palm Springs, California area). I didn't want to follow too many instructions so I decided just to make up the pattern. At first I wanted just to knit, I do love the process, but then just garter stitch seemed too boring.

Start with 3 stitches and increase one at the beginning of each row, then when I got to about 8 inches it looked like it needed a little something so I started to knit the stitch below on every other stitch leaving the border in garter stitch. When I completed the shawl it looked too boring so I added my "stash buster" crochet "frufru" edging to it.

The yarn I used for the shawl is by Creative Yarns, Hearty Worsted New Zealand Wool. The FruFru got whatever I grabbed of some of my leftover stash.
Posted by Ana Petrova at 4:35 AM 3 comments:

I met the Cuban "Soup Nazi"

I was in Las Vegas recently after visiting a few "too much food" buffets my friend and I decided to venture out and look for a local restaurant. We found "THE SPIRIT OF CUBA" absolutely delighted with out find after carefully reading their menu choices we decided this may be a good one for lunch. We were starving and actually anything would have sufficed at this point.

Located on the corner of Sahara and Decatur, with a nice friendly decor. As you walk in there is a dance floor and musical instruments including conga drums on the stage, one can just imagine the Cuban music and dancing at night. The granite tables and sturdy leather chairs, offset by framed photos depicting Cuba in the halcyon days before Fidel was just lovely.

Thinking that we may have to come back during the dinner hour and maybe enjoy some Cuban music and dancing. The prices seemed reasonable $8.95 for the Ensalada Mixta con Pollo. When my chicken salad Cuban style arrived I decided that there was just not enough chicken and I wanted a little more protein, so I ordered the Sopa de Frijoles Negros-I figured a nice black bean soup and the salad should be enough for my lunch.

The soup arrived and after tasting, it was just bland no taste at all, so I politely asked the lovely and very handsome young waiter to please bring me some salsa to spice up the soup a little. There is a Brazilian Restaurant that I frequent here in Los Angeles and they too have Sope de Frijoles Negros and Fatima the owner serves it with a lovely home made salsa. I was kind of hoping for that, when the waiter kind of looked at me with a "OH NO" expression and said that he would ask the chef, I kind of got worried. So my friend and I were laughing as I told her about an experience my son and I had once at a Japanese Restaurant on Ventura Blvd. in Encino. We wanted some soy sauce and the chef came running out and practically threw us out of the restaurant for not liking his creation. He told us that it did not need any more soy sauce it was just fine the way it was! Eat it the way it is or leave! So there! That was the Japanse Sushi Nazi.

We laughed and my friend said, that sounds like you're making it up. I said no that really happened to me. And no sooner do I get those words out of my mouth here comes a very angry woman with her hands on her hips, asking me "What is wrong with the soup?!!!!!????? Well if looks could kill I would have been dead. The Cuban Soup Nazi, she said THIS IS NOT A MEXICAN RESTAURANT! If you want salsa go to a Mexican Restaurant. There is nothing wrong with the soup!

She was dressed in beautiful gabardine slacks, with a button down shirt, lovely belt with a sterling silver buckle. Lovely silver bangle bracelets and a pair of glasses she must have gotten at the L.A. Eyeworks boutique. Where Elton John shops for his glasses! But she was pissed!

My friend was laughing so hard she could hardly contain herself, and me I folded. "I'm sorry I don't like your soup, could you find it in your hear to forgive me?" She said NO.


Oh yes we were charged $4.00 for the soup I didn't eat or didn't like! But at this point I was scared to confront the Cuban Soup Nazi. But it was worth $4.00 for the tale and the good laugh..... So if you are in Las Vegas be warned about the Soup Nazi.

It's been so long since I've updated my blog that I forgot my password. Shish so many passwords, so little time.

I have been so busy knitting and some traveling and cooking that I have not had much time to pay attention to my blog. But I'm back. I want to post my latest kinitting projects: 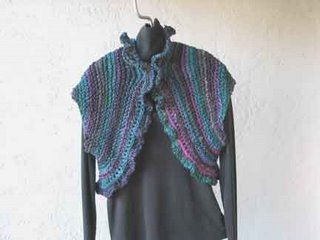 and the back view: 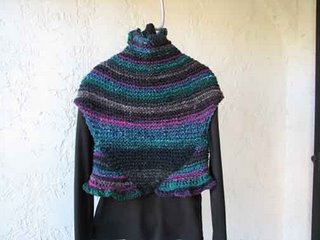 I designed this piece with "something to warm my shoulders" in mind. When I completed the project I took it to "Stitches from the Heart" my LYS and Brandi put it on and she looked great in it, so I gave it to her. 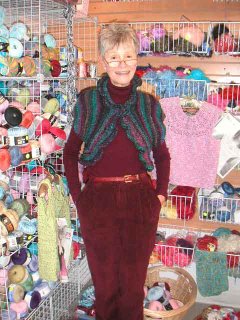 It's made of "Noro" wool. There was 3 hanks but no label so I'm not sure which Noro it is. All I had was 3 hanks so I just started knitting a triangle by starting with 3 sts and increasing one stitch at the beginning of each row for 10 inches. Then I switched to increasing 2 stitches at the end of each row: the last stitch I knit then knit in the back and knit in the front.

Voila! Sewed the tails to the V left arm holes then added the fringe by picking up stitches all the way around with my 60" circular needle. Increase every other stitch, knit one row and crochet bind off.
Posted by Ana Petrova at 10:47 AM 1 comment: