The Summer flew by I'm ready for some cool weather. 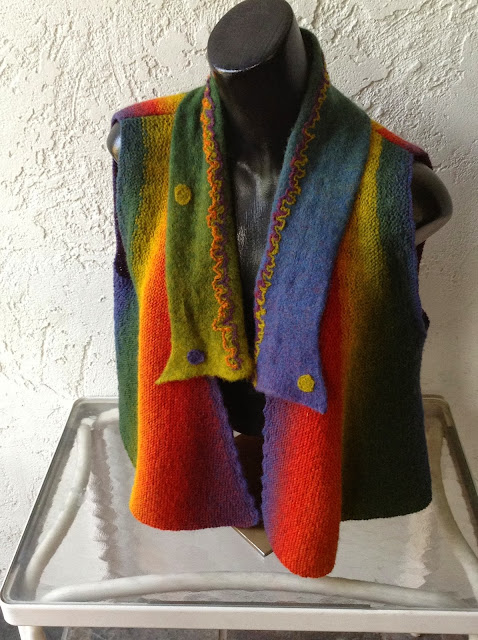 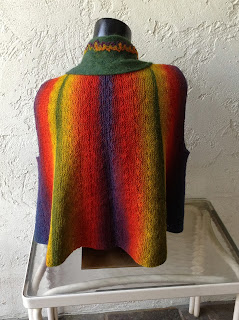 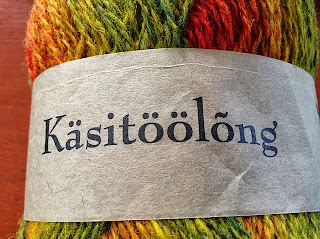 The name of the yarn is in Estonian and I'm afraid I can't pronounce the word, there are too many dots .... The yarn is wool with long color changes, very similar to the Danish, Kauni. These are my colors, I just look better with strong colors and most of all it puts a smile on my face. The fit is good and it feels like an "old sweater".

By that I mean it's comfy and I love wearing it. Lots of short rows loose fit "swing vest". The knit went pretty fast because I was anxious to get it done to be able to wear it. The collar is added after the body is finished, I used the same yarn and felted it just for a little texture. Let me know how you like it, I've written the pattern/recipe and now I'm going to make another one to fine tune the written directions.

The view from my room. 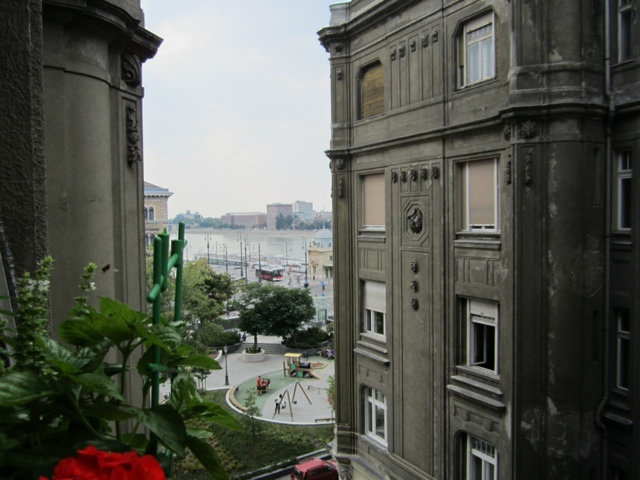 And across the street the Fovam market place. 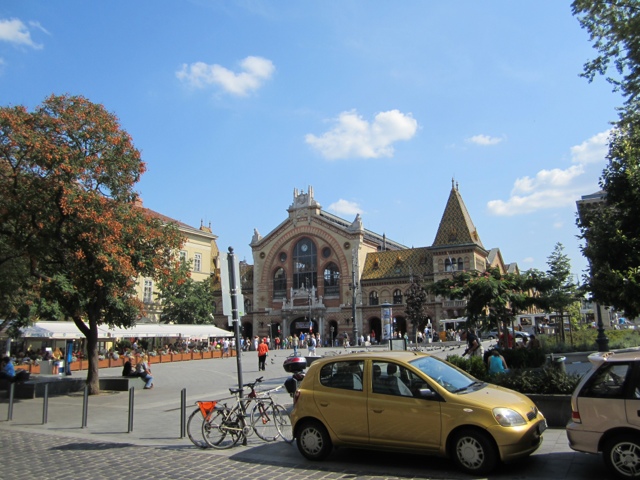 My iPad only speaks and writes in Hungarian.

I'm not sure how this is happening but it is.
I guess it knows where I am, but how does it know that I speak Hungarian? 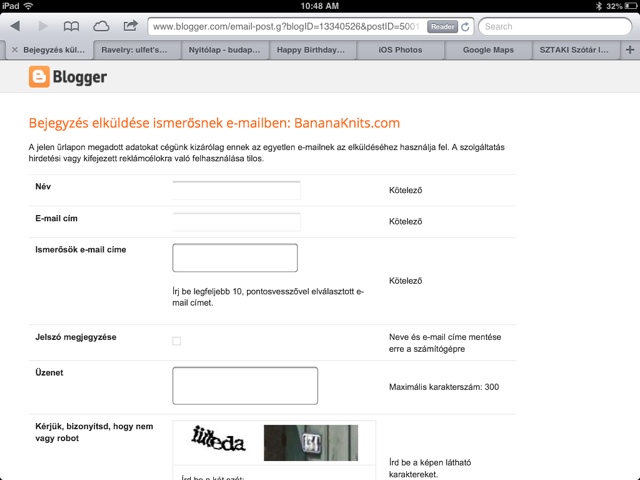 Check out Rick Steves video that he made at this great market place.
http://www.youtube.com/watch?v=VyyJnd_bxaE#t=35

The guide I'm reading says: "Budapest is the city of cultural diversity, festivals and thermal waters! Besides its unparalleled beauty, it is best known for its built heritage witnessing several thousand years of history, for its medicinal and thermal waters and for the fantastic Danube panorama."
I was born here and lived here until we escaped and moved to Los Angeles when I was 14. Many years ago. People often ask me what differences i see. For me it's a mixed bag, it is so amazingly changed yet it is the same. Living here at my cousins apartment I feel I stepped in a time machine.
I'm sleeping on a day bed that I slept in as a child. The furniture the porcelain figurines, the dishes all live in my memory. 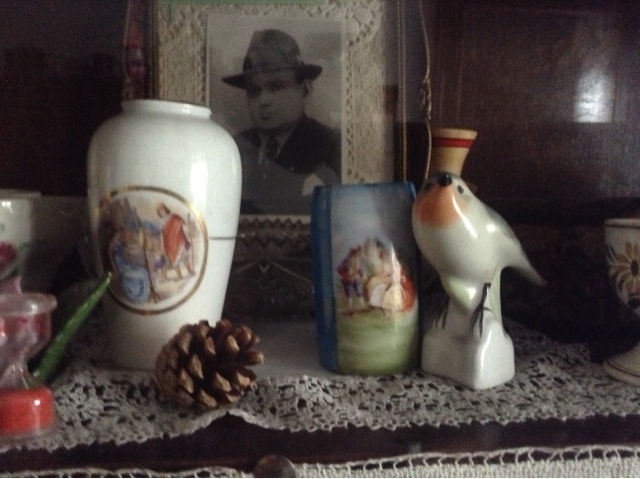 Szécsényi Bath or Spa as they now call it is one of the oldest. They celebrated it's 100th birthday this year. Yes folks it's been here and well used for a 100 years. I came here with my mother and my mother came here with her mother.
It's a Saturday afternoon and it was packed. It's located in the heart of the city in the large park which we call Liget. Now they are calling it a Spa vs. the baths. i guess that term sells better to the foreign visitors. They offer spa treatments. 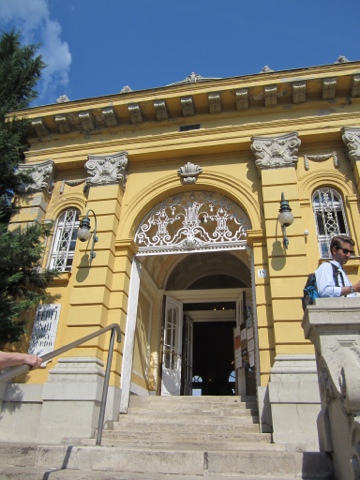 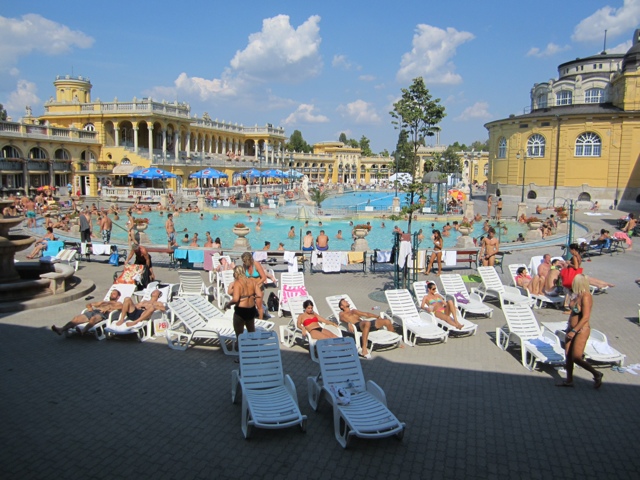 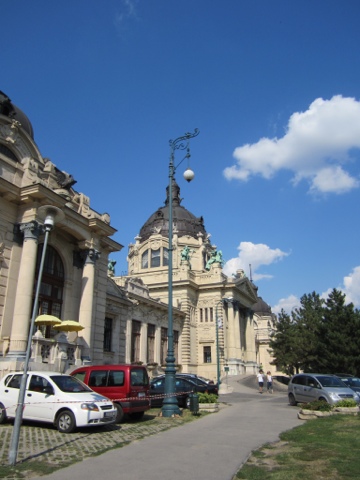 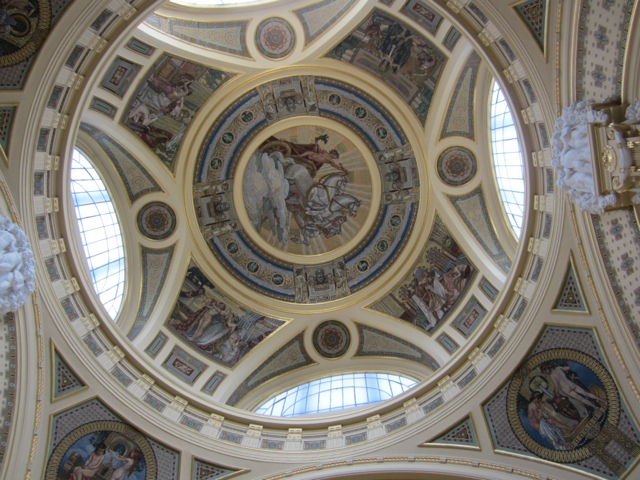 They have renovated and restored the place beautifully! 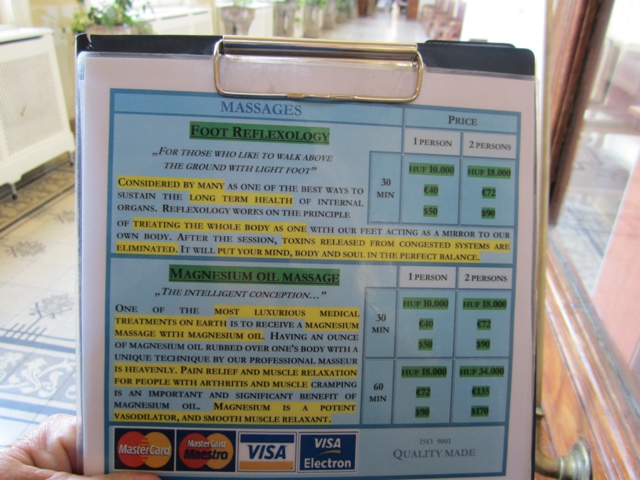 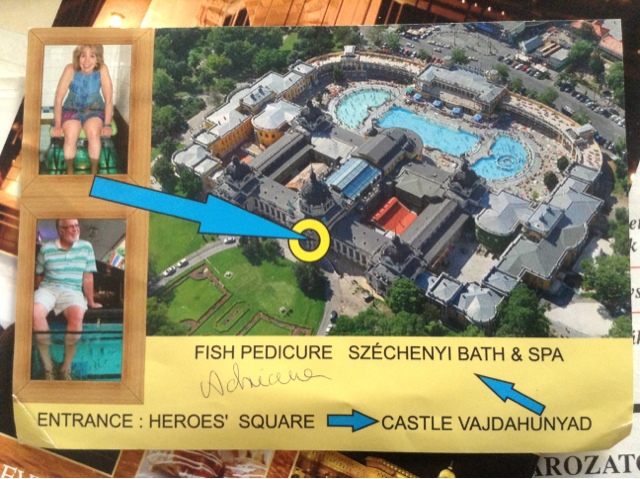 This is new, fish pedicures were brought here recently by the large Asian population residing here. It's fascinating, you just stick your feet in a fish tank and all these little fish start munching away your dead skin. 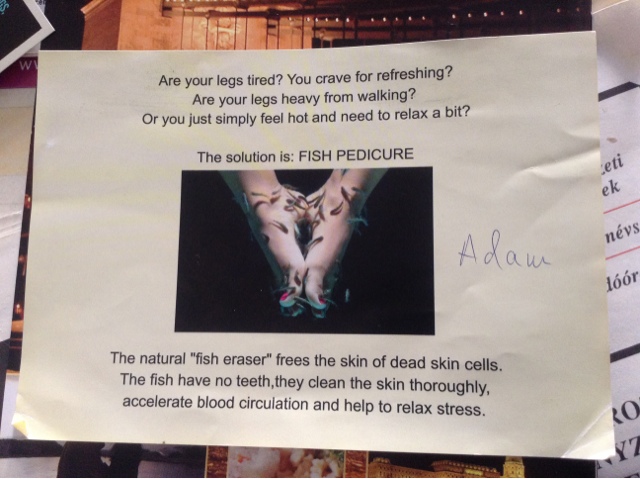 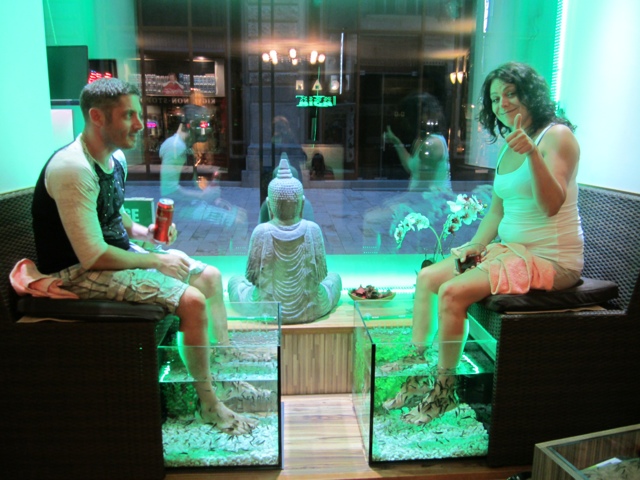 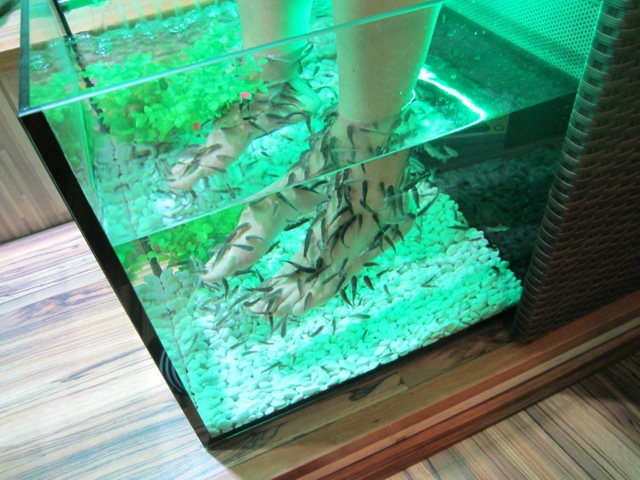 The cost is 3,000 Hungarian Forints for 15 minutes. (About $13.00 U.S. Dollars or 10 Euros)
This is brilliant, no human is involved except for taking your money. Come in put your feet in the water and pay.
I've had a hard time keeping track of the currency exchange, here is my high tech cheat sheet. Hungarian Forint to U.S. Dollars. 1,000 Forint = $4.40 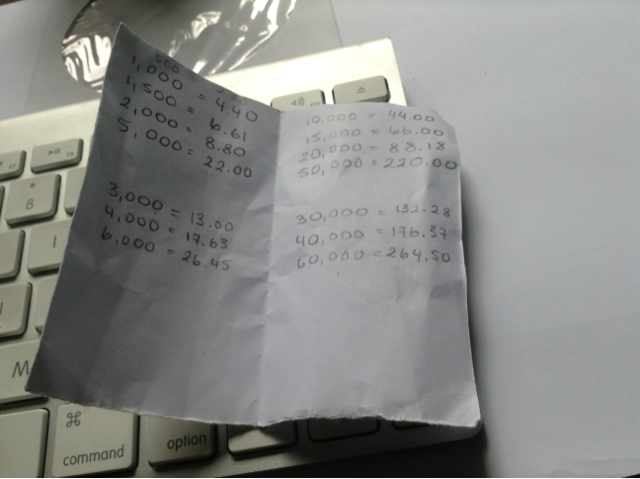 As we strolled in the park with the weather really perfect, my cousin Vera pointed out that there are little fish in the pond. If I wanted I could just dip my toes in there and it's free. (Ha Ha) 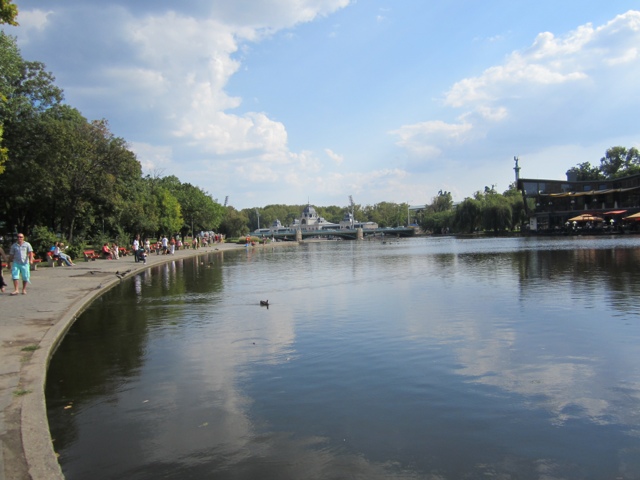 With my fibromyalgia I often get muscle aches and pains. So getting a massage turns into an "oh but it hurts so good!" But after the massage I feel better. I really think it helps this old and tired body if nothing else it helps to try and relax. After all the walking and stresses of travel this treatment is a necessity.

Food is everywhere even in the "Relaxation Room" but the chamomile tea is lovely. I will have to tell them that the terry robes they give you to wear needs to come in a larger size than "one size fits all!"

The view is nice also.

I am knitting and as you may have noticed, blogging a lot.

Posted by Ana Petrova at 5:58 AM No comments:

Life on board the ship.

Joan checking her eMail and updating her blog. She was convinced that the connection was better in the hallway. I guess it worked for her.

Coffee for me, in the Lido lounge. This early in the morning the place is empty. They do offer a limited offerings 24 hours a day. Being on a cruise you do not go hungry.

There are several choices for meals, buffet style or sit down dinners. I prefer being served in the dining room. And I find the food has been really wonderful, I guess I will diet at home.

I hope I don't bore you to death but here is what I had for dinner last night. Joan has been taking pictures of all the food she has, I get bored with doing that and most of the time by the time I remember I've eaten half of it. But last night we had success I managed to take a picture before I delicately gobbled up my food.

Before I left home I was listening to a radio show and they were talking about people who take pictures of their food. And the study shows that if you take pictures before you eat or any ritual you may have, satisfies and slows down your hunger. I'm not really sure that this works for me, I had no trouble at all finishing each course. But all this travel and sea are makes me hungry.

Ceasar salad, delicious...... small portions because there is soooo much food.

After posting this I don't think I should eat today!

Location:At sea in the Baltics....

Posted by Ana Petrova at 9:06 PM No comments:

Getting on board ship..

We were all so very excited like little children just at the sight of the ship. Holland America, The Eurodam! A mere 2,104 passengers eagerly await boarding. I was rather impressed how smoothly it all went. Lots of staff directing us handing us numbers advising to have our boarding pass and passport ready etc.

The cabin is a wee bit small and Joan my roommate was surprised, somehow she expected the "room" to be larger. "It looked so much bigger online!" The virtual tour was a bit misleading. But we all know that hotel rooms looks so much better on the web. I Love our cabin and love watching the ocean and the sea air.

The obligatory safety meeting, roll call the crew shouting at the top of their lungs: "ROOM 5069 are you HERE?" YES WE ARE we are giggling and shouting back. Luckily it did not take long and we did not have to wear our life vests. We were told that if we do not attend this meeting you will be THROWN OFF THE SHIP!

First stop the IT guy! Can we get WiFi? This was very important to both Joan and I and the answer as you see is YES! Not the fastest connection but good enough to upload to our blogs.

Craft Cruises "cocktail party". Drinks and munchies served. We will not be going hungry on this trip. There is food everywhere! But I continually get lost so there is quite a bit of walking involved to find my way from one end of the ship to the other. I'm considering this exercise.

Posted by Ana Petrova at 9:05 AM No comments:

Suitcases packed, again and the excitement is high. Anxiously waiting to get to the port and board our ship. We were up and ready to rock n roll early this morning, visiting the square that was so full of people yesterday that is now empty.

People, bikes, buses ... The town is just packed with tourist, this is that time of year!

But early in the morning the square is empty, except for the workers. The square is cleaned up and ready for another busy day.

Posted by Ana Petrova at 8:13 PM No comments:

I love purses so this museum was on my list of must see.

"Personal bags have been useful implement for both women and men since earliest times. Because clothing as yet had no inside pockets, bags and purses would be used for carrying money and other personal items.

From the late Middle Ages until the seventeenth century gags and purses hung from a belt or girdle. This, however made it easy for pickpockets, who could cut through the cords.

Fascinating facts about purses and hand bags for both men and women through history. I love purses and bags and little ditty boxes. Lots of carefully gathered treasures to carry around."

"In some areas of Europe (including Italy, France and to a lesser degree in England), there was the tradition that during the wedding ceremony the bridegroom gave the bride a special wedding purse filled with money. The money sybolized the transfer of wordly goods.

Sometimes the number of coins was symbolic: 13 coins represented Christ and the 12 apostles, for instance. The tradition continued in France from the twelth to the eighteenth century.

The wedding purses were often decorated with hearts, Cupids and flowers......"

These were one of my favorites in the museum.

"At a time when every respectable woman was expected spend her free time on fine needlework, the workbag was often taken on visits and it was not uncommon for the ladies to work on their bags while taking tea together.

The lighting was very dim, I would have liked brighter but I do understand that they are trying to preserve the colors and condition.

I did not see this written up anywhere but one of the ladies at the Stitch n Bitch we were at told me that this museum all started with one woman's collection. It was displayed in her house and she would let people come and visit.