My latest dilemma: Which button to choose?

I have a huge collection of buttons (if you want to see pictures see my button blog:) BananaButtons

I have a great deal of fun looking through the buttons for a project I am working on. In my opinion a button can make the outfit. If I put a fabulous button on a sweater even if the yarn or the style of the sweater is not so fabulous the sweater suddenly becomes fabulous. The button sets the tone and the look. It's like the purse and shoes is to an outfit.

Somebody wrote me an eMail and asked if she should keep her buttons she inherited from her grandmother "carded"?
I am by no means an expert, but when I have asked some real button "nuts" they have conventions etc. they say that the cards are very important. So if you want to keep their value as a collectable keep them on the cards, as with any collectable the more original you can keep it the more the value.

However, for me I don't care about the collectable value, I just love to play with them sort them touch them and once in a while use them on a project.
Posted by Ana Petrova at 6:48 AM 4 comments:

A new (to me) technique for casting on.

The German Twisted Cast On:

This cast-on is also known as the German Twisted cast-on, the Old Norwegian cast-on, and the Twisted Half-Hitch cast-on, this is supposed to be a more "stretchy" and it is not as "curly" cast on. I will give it a try and see.

To see detailed instructions: http://knitting.about.com/library/bltgcaston.htm
Posted by Ana Petrova at 6:47 PM No comments: 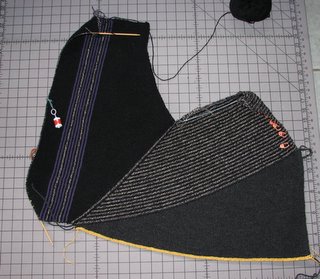 And now that I have finished the first one here is the progress of the new.....with my modifications...

The original Ballerina is back heavy and as I wear it after a few minutes it starts sliding back. Probably the way it was meant to like Japanese kimono feel to it. The front is short and the back is very full and heavier and as you wear it, it pulls back and this annoys me, I want it to stay put so on the new one I made less panels in the back and made the front longer. I've tried it on and it still looks pretty much the same but feels better. 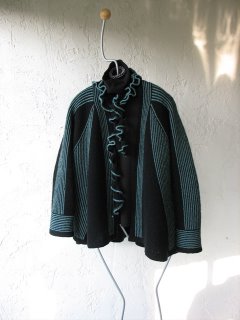 I have now rewritten the instructions and made my modifications, (probably to Hanne's horror)
I'm knitting another sweater. Yes I'm a glutton for punishment!

This time it seems a lot easier. Once I got rid of the silly bottom bit, and replaced it with slip the last bottom edge stitch purlwise and knit the first stitch in the next row in the back "leg". This gives a lovely even edge and I don't have to count each row and pay attention to the bottom as well as the short rows and stripes.

This in my opinion is a good alternative and it looks really nice also it's easier to pick up stitches for the bottom edge if I want to add an extra edge. That bottom bit just complicates the whole pattern that is already complicated and badly written.

I also knitted a potato chip scarf to go with the sweater with black and sage one row edge. It looks just great. I will post pictures.

I didn't think the little bit of black yarn I had left over was enough so I sent an eMail to Hanne I tried to get an extra ball of black yarn, and got firm NEGATIVE. (I think I upset her to even dare to ask.)

She does not sell yarn!
Only the Kit!
So if I want an extra ball of yarn I have to buy a new kit!

It turned out that I had enough yarn left over to do this (it's a very skinny potato chip scarf but looks ok). It was very close though I knitted up almost to the last inch of the yarn. I would have liked a little more yarn...oh well....

(Potato Chip scarf if easy but if you want to have the pattern: http://www.knitpicks.com/projects/Projects_Display_Yarn.aspx?itemid=50355220# )


Thank goodness there are so many other brands of yarn out there! 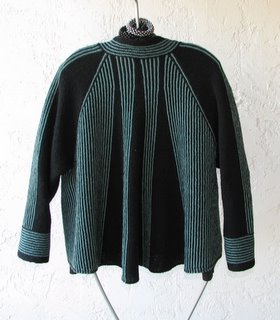 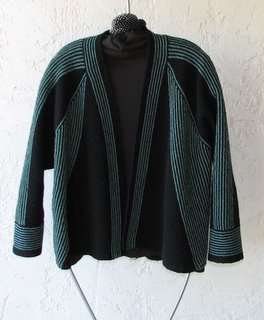 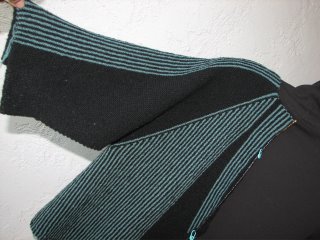 The question has come up if it's difficult, I would say yes! It is a lot of knitting on size 3 needles and a lot of detail to pay attention to. 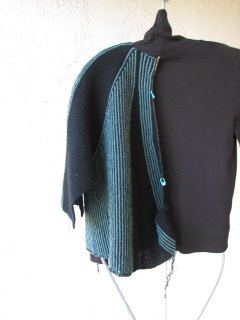 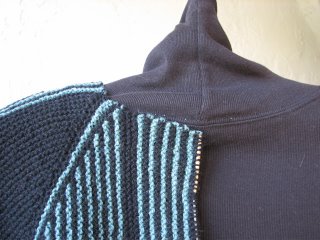 This is what it supposed to look like when I finish! Well Maybe.....stay tuned....