The Magic of Felting...

Some Felting tips and How to's...

Put the garment in the bath tub with hot water some shampoo and baking soda and have a bucket ready with cold water. Climb in and start stomping around like Lucy did with the grapes. Or get an old fashioned washboard and a little patience it will felt. I got my washboard at my local hardware store for 13 dollars.

I actually find that it's not so much the heat as the agitation and shocking with the hot and cold rinse. Also the ph level makes a major difference in the speed of felting. Soft water which is like rain water is very acid and will not felt well. You are looking for hard water, this where the baking soda comes in, you want the ph level on the alkaline side.

For me this is the fun part of felting, it's more of an art than a precise science. I've never had the patience to make a swatch and measure and precisely predict the way a piece will felt. I find each yarn is sort of different and if I use the same kind of yarn I kind of know how it's going to felt. But I find it always felts more vertically than horizontally.
Posted by Ana Petrova at 7:59 AM 2 comments:

Stayed at the Mandalay Bay, heard that it was a nice hotel. Maybe in it's hey day but not today, not in my opinion. I don't think I'm going to stay at a "mega" hotel again in Las Vegas. They are just over the top, tooo big! I can't find my way out too big.

It took one hour to "valet" park and check in. When I finally got up to my turn at the valet parking, I asked the guy what gives? Is it always this crowded here? And his answer was "What do you expect of a cheap hotel?" Burst my bubble, I thought I was staying a "nice" fairly expensive hotel. "Nah, not since they lowered their prices now everybody and their brother is here. The last of the big tippers, if you know what I mean. We have a lot more work and the tips are less."

My first question was "Did they touch you?" she said "No". But how humiliating it was to take all of her clothes off in front of a female security officer. I'm glad that did not happen to me not that I mind being nude in front of somebody but the chore of taking all my clothes off and getting dressed again, then I wonder if they let her get back in the line at the place she was at or at least let her go in the front. She did not look like a terrorist to me but you never know a caucasian old lady going to Las Vegas from Los Angeles and has a one way ticket ooh ooh that is a flag. Better safe then sorry, she could have had something hidden under her clothes.

I immediately asked my friend who introduced us if this lady was a bit off? Maybe delusional or like to make up stories or maybe starving for attention. Nope none of those, she is quite well spoken intelligent woman in her fifties coming home from Los Angeles and her mistake was to only buy a one way ticket which was the dead give away of a terrorist. Glad I got a two way ticket even though I drove home and never used the return portion.

But I digress, I got to LAX at the crack of dawn, I forgot about having to get to the airport an hour or two early and I live about 15 minutes away. 6 am flight meant I had to get up at 4 am I hope I remember not to do that again. Suitcase in hand and my wonderful felted "Ibiza" bag as my carry on. I bought my ticket online so I had an "e ticket" printed it myself, and I was kind of proud of my accomplishment because it was not an easy feat to book online and use my so called free miles. It costs 15,000 miles for this ticket, was it free? I guess that is a whole subject onto itself. But off I go clutching my printout and my felted bag with my knitting and there is lines and lines all over which one to go to? I finally figure out that I can go to the self serve window because I already have my boarding pass and ticket.

I do travel and have traveled all over the world but I've not had this experience before. I had no idea what to do. I get in line and they tell me to go to that window, so I do. I'm standing there and there is nobody at that window to help me. I'm standing there... the "line guard" says "go ahead" .... I look at him annoyed, I'm here what do you want? Again I get a go ahead, again I give him the old knock it off look, I'm here. I have luggage there is nobody here! It does not dawn on me that this is the "self serve" line, and that I'm supposed to look at the little monitor under the counter and touch the screen with the various questions they are asking. Finally the guard comes over and shows me and gives me the old "lady you should get out more often" or "what planet are you from" look. I admit I kind of looked like a country bumpkin with my hand made bag tied together at the handles and the confused I've never been on an airplane before look.

It all went fairly smoothly after that and the flight was so fast that I did not even have time for more than one or two rows of knitting. Las Vegas was not hot the weather was actually on the cool side for this time of summer/fall. Usually September is still very warm. The "natives" were telling me that I should have been there last week when it was a 120 degrees. How do they live in a 120 degree temperature? I'm thinking that if you park your car in the sun how do you touch the handle without getting burned? But Las Vegas is growing and growing and is still the fastest growing city in the country. People flock to Las Vegas it was packed fully booked hotels traffic on the freeways, lines everywhere. I don't get it. But God Bless if they like it who am I to criticize.

I'm headed off to Mt. Potosi, the 8,500 foot mountain just on the outskirts of Las Vegas. Not many have heard of it but this is my second time up here. I had never really heard of Mt. Potosi before this just that Carole Lombard died on the slopes of Mt. Potosi. That is where her airplane crashed. Shame I liked Carole Lombard she was cute, pretty and funny, what a love affair her and Clark Gable must have had. 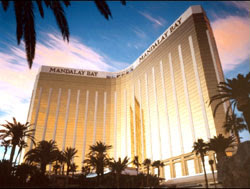 Posted by Ana Petrova at 5:18 AM No comments: