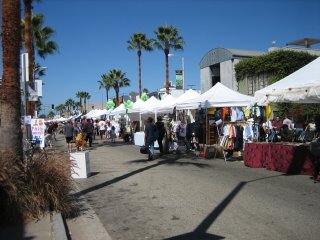 The weather was perfect, "Goldie Locks" weather. Not too hot and not too cold, just comfortable. It was sunny and a nice breeze came from the ocean. I guess that is one of the reasons we all flock to Southern California because of our weather. 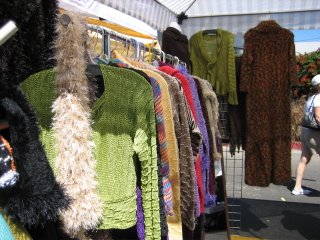 A professional knitter friend of mine had a booth, Dolores De Luce "Knitter To The Stars". She says on her web site:

"Dolores DeLuce, like many people in Hollywood, grew her one of a kind, hand knit business out of her need to survive as an actress.

"It was just a hobby and a remarkable remedy for curtailing my compulsive behavior. I can't sit still without my knitting. I would knit in acting class and other actress/models who were actually getting work, would buy what I was making."

I must say Dolores' knits were the nicest of all the garment at the festival.

Oh but this is Venice so we had lots of fun people dressed in colorful clothes, dancing with hoola hoops, parading with dogs, I think a good time was had by all. 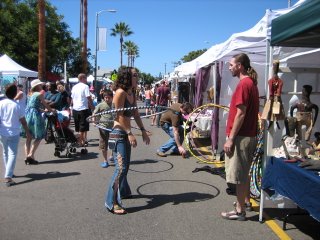 I love these shoes! I've bought a few pair over the years and can not believe that he actually makes these shoes and he only has one arm! After a car accident he lost his left arm but it did not stop him from making shoes! I've met him and his wife and they are a lovely couple and make wonderful hand crafted sandals.

The sandals last for years and they even "resole" them. Last year however they told me that they are retiring and will not be back at this festival. To my surprise there he was! I thought you were retiring! Well we were and then we finally talked our son and daughter in law to take over the business. There is Lee with his daughter in-law. 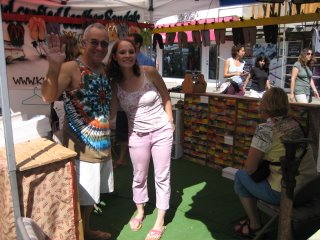 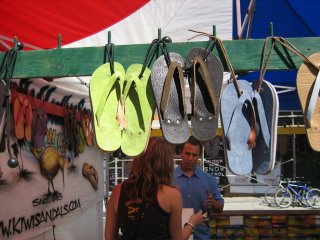 And what is a Venice event without political statements? 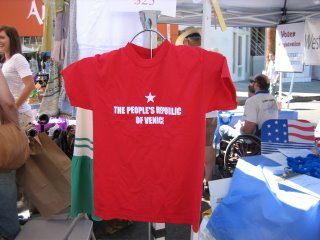 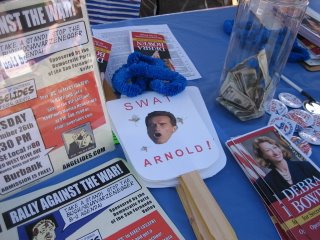 The "Swat Arnold" fans, I thought were kind of clever but getting old, I've seen them now for a couple of years. 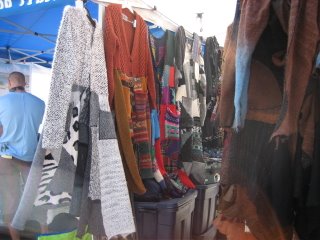 Now this lady had these "patchwork" knits, they were "steeked" (knitting cut and sewed). It looked like she took old sweaters from thrift shops chopped them in pieces and sewed them together. I think she wanted $450 dollars for her creations! I don't know how many she actually sold though.

From a distance they kind of looked nice but when I saw the detail I felt it was very poorly executed, she just used her zig zag attachment and started sewing. I've seen this kind of work before at other fairs and swapmeets but I've never seen anybody wearing one of them. 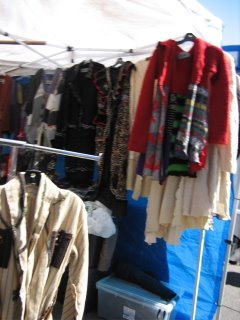 When I got home my DH asked if I bought anything and I said no I like what I knit for myself better than anything I saw.

There were a couple more people selling knitted things, these felted purses seemed popular, lots of people looking at them. 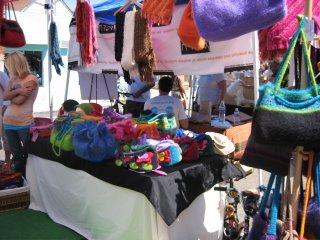 Then there was the crochet lady, sort of left over from the "hippie" era, I guess it can be called "retro" now. She had these sort of belts that she was wrapping around herself in different combinations. She was very nice and posed for me wearing her creations. 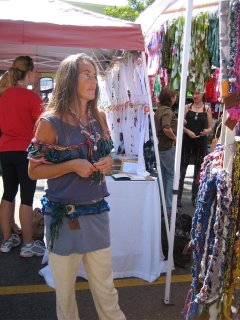 Great Photos, Ms. Ana! It was a gorgeous weekend...looks like you had fun!

I wish I'd been there... although with your photo essay I almost feel like I was. I wouldn't have bought the $450 sweaters either, clever idea though it is. (As all we creative types know too well, clever idea doesn't necessarily translate to big bucks.)

Lucia how right you are about how clever crafty ideas do not translate into big bucks. But it's a lot of fun creating them.