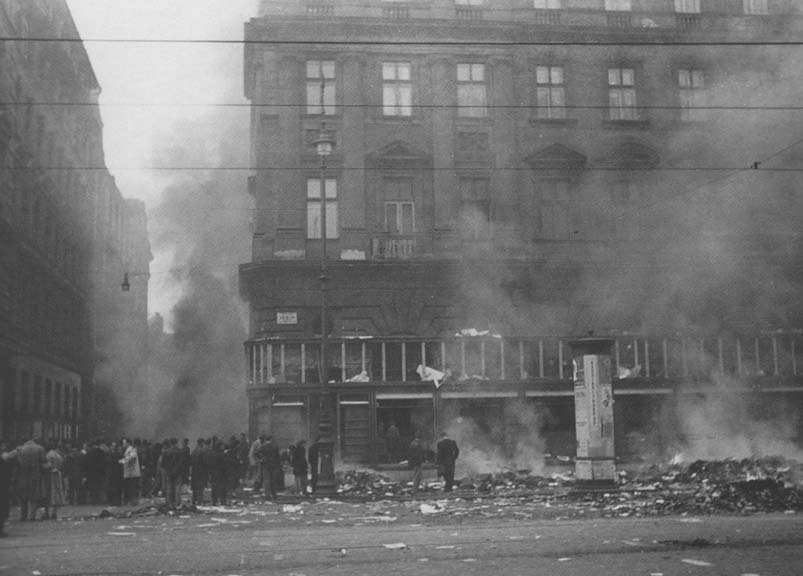 Today is the 50th anniversary of our escape from Hungary. November 29th 1956 the three of us got dressed packed a small suitcase, walked out the door of our apartment and left. How my parents must have felt. I was young 14 and fearless and I really did not comprehend all that this really meant. Now that I'm older my memory of the events are sometimes hazy yet other parts of it are etched in my memory crystal clear. The little details are what sticks in my mind, what I wore, my winter coat the first snow that fell, the crowds on the streets the conversations on the train the first chocolate bar the Austrian lady gave me after we were across the border etc.

(this is the first picture of me after our escape)

To leave our home with everything we owned with just the clothes on your back and a suitcase of photographs. The click of the front door closing when we knew it was for the last time we would hear and see this door close. I still remember exactly what that front door looked like when I looked back. We left our home and were about to leave our country and our future was totally unknown. I did know that we may have to sleep outside and that my warm and comfortable bed and apartment was no more. I remember putting on as much clothes as I could like my mother instructed me. I did have a journal but that was lost a long time ago.

Mother did bring memories she knew that is all that was valuable to us that we survived and she had her treasured photographs. Everything else could be replaced if we had our freedom and health the material stuff did not matter. This was an early lesson I learned from my sweet mama, how I miss her.... she has been gone for over ten years now but I still think about her often. She was a good lady with a good heart and most of all a survivor, she always was resourceful and took care of me no matter what.

(this is the picture we took when my father got home)

When I was growing up we did not have Kodak Brownies and all the photographs we have were done by professional photographers, my mother always made sure to have pictures taken. So many people of that era have almost no memories because of the difficulty and expense to take photographs. Unlike todays world where we have the total opposite too many pictures with the invention of digital cameras there is the opposite problem. Mother really treasured these photographs and I too love them.

My parents seldom talked about their hardships that they endured during their life in Hungary and Romania before the war and after the war during the Communist regimes. My father was a war prisoner in Siberia so far up North that they would see the Northern Lights. The thought of how much my father must have suffered through this for 4 years I can't even imagine.

But the family knew exactly what he was going through that is if he survived the trip, because my grandfather was at the same prison 30 years before. He was captured during World War I and spent 7 years in Siberia! The irony is unbelieveable my grandfather was captured during world war 1 and taken to Siberia to the very same camp that his son ended up 30 years later during World War II.

Of course we did not know this at the time we only knew that he disappeared and what had happened to him was a mystery. Weather he survived the tifus or any of the other horrors we did not know. Every once in a while we would get a message here and there from returning prisoners that they saw him alive. But the years just rolled on and all my mother could do is hope and tell me wonderful stories and show me pictures of my father she always told me that someday he would come home and bring me a beautiful doll with real hair.

Then finally one day he was spotted walking home from the train station, that is how they returned. It was summer I remember every detail. The prisoners would come home and they arrived on the train and were told to go home. My father came home and indeed he gave me the most beautiful doll with real hair. I did not know that mother bought that doll years before with the hopes and prayers of the return of her husband.

I remember in school for many years after the war my whole class would celebrate whenever a students father would return home from Siberia. Coming home from the war some 7 or 8 years in prisons and the horror stories were many... the tears flow just sitting her writing about it.

Here is a page from my journal I made a few years back a picture of my grandfather and my father and the "Gulag" room from the Terror House Museum in Budapest. The floor is a map of Siberia and the tv monitors along the wall played news footage of the prisoners. This was the first time I had seen anything like this. My knees buckled and the tears flowed. 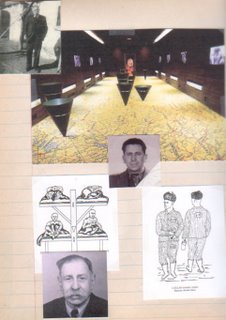 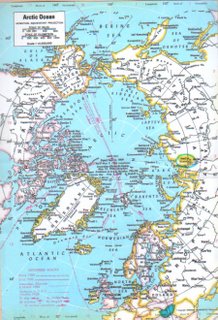 This is a map of the north pole region and I circled the town where the prison was located. When I visited the Terror House Museum I finally got to put pictures to the stories and really realized the reality of it all. I will write about this again it really helps me to share some of my memories..... thanks for looking.

Links:
A previous post about the Hungarian Revolution
The Terror House Museum in Budapest
Posted by Ana Petrova at 11:52 AM

Wow. I am crying for you. We really need to look around and see how lucky we are now-a-days. All of the little things that are stressful, and irritating to me still don't measure up to such pain. Your parents must have been so strong to live through so much. I'm so glad you escaped.

This is so powerful. I cannot think about these POW camps without feeling sick. Every time I go outside without a coat and feel a bit chilled, I imagine not having warm clothes or even shoes and living without enough food and all the much worse things that go with it.

How wonderful for you that your father survived and came home.

YOur memories brought tears to my eyes. It makes the little things we deal with nowadays seem so unimportant. I hope your memories stay alive for many, many years so we'll remember what so many went through not that long ago.

How interesting & sad at the same time. I don't know much about this particular era in history, so it's poignant to see it from the POV of someone who was there.

Ana,
Thank you so much for sharing your story with us all. You look exactly the same, by the way! Throughout all of this, you have preserved the child within and it shines through!
Ellene

Yes...tears....me too. An extremely compelling story, My Dear Ana. We must give thanks again and again for our riches. You are just like your parents....strong and amazing!

Yes...tears....me too. An extremely compelling story, My Dear. We must give thanks again and again for our riches. You are just like your parents....strong and amazing!

I'm so glad you recovered (or you seem to have) from what you went through as a child. Those memories will never go away for you. It must be so difficult to tell your story, but I think it is good for you to talk about it. Thanks so much for sharing your story.

Amazing story, thanks for telling us.