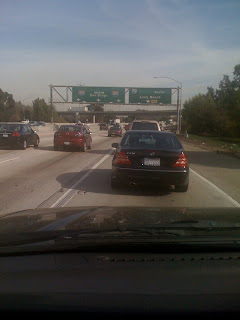 (Don't tell anybody but I got lost going to the Long Beach Convention Center all 3 days. It's only about a 30 minute ride from Venice Beach.... next time maybe I'll know...) 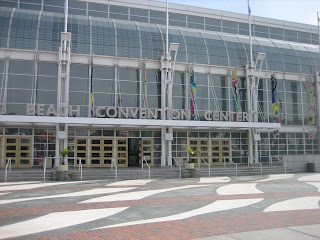 I was hoping to post and report during the weekend but this was a totally unrealistic. There was so much going on so many people to talk to, classes to take and no photos allowed. My reporting ambitions were slashed, if I could not take any pictures so here is a little video from the TNNA.org web site:
(caution the volume is a bit on the loud side at least it was on my computer) 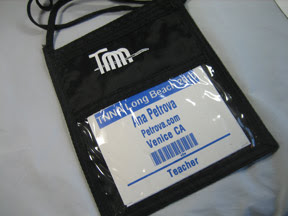 I am a TNNA member as a "Teacher".
I love teaching and combining knitting & teaching is as good as it gets for me these days. At a later time I will post more about the places I'm teaching. Right now I am so busy writing a knitting book and preparing lesson plans, making arrangements to travel and oh yes my day job.

This is an article I wrote for Craft Cruises as part of my bio. I thought I would share it with you, it tells my story "How I became a teacher":

I was born in Budapest, Hungary and came to the U.S. to Los Angeles as a teen. We had $30 to start our new life, so I needed to be as self sufficient as possible. If there was a job I could do and I had the time to do it, I was there. I had jobs before school, I had after school jobs and weekend jobs. On my way to high school, I noticed that there was a new business going in on the corner of Chrenshaw Blvd. and West Santa Barbara (now MLK Blvd.) It was a beauty college. This perked my interest as my mother had worked in a beauty shop and my uncle had owned a large salon before the war in Budapest. Hair dressing was in my family. I remember when we were in the refugee camps waiting to come to the U.S. after we escaped Hungary, the hairdressers were able to barter for their services. Camp or no camp, people still wanted their hair done.

I wondered how much would it cost to attend? Was I old enough? I decided to walk in and ask if I could work there after school. They asked what I could do? I was learning how to type and work the mimeograph machine in school, and felt confident that I could do whatever typing they needed. They loved the idea of being able to get this difficult and expensive task done by this eager kid. Back then they did not have Kinko’s and duplicating papers was much more difficult than today. The tuition and the 50 dollar equipment make up case was traded for my services. By the time I graduated high school I had my cosmetologist license and was offered a good job in the Pacific Palisades.

One day we got a request for a hairdresser to make a house call. I was the youngest and least busy, so they sent me. My directions were to go down Sunset Blvd. and turn right on Rockingham Road to Judy Garland’s house! I knew she was a movie star, but I did not realize what a big star she was at the time. But when I walked in and saw this beautiful grand piano, full of beautifully framed photographs, all signed affectionately to Judy, I realized she was a big star. Jack Kennedy was even among other famous faces I recognized! As a cosmetologist I was able to travel all over the world and was lucky enough to meet people I would not have been able to meet only in my dreams or the movies. Then I got married on a television show location “I Spy” in Athens Greece, my life was glamorous. (Oh the 60’s..... we had fun)

By the time the 80’s rolled around, I settled down and became a mother. I thrust myself into this role with pleasure and gusto. When my son started school, I was having separation anxieties, he had no trouble getting used to school. Except for the first couple of days when he cried as I shoved him in to the room with 25 other little scared faces. I volunteered for anything that the school would let me do. If I could be on campus to keep an eye on my little darling, I would do it.

Computers were new at the time but because I liked to type and liked gadgets, I had a computer a brand new Macintosh. (A 128k for those of you who are the “geeky” type) I loved my computer and was more than willing to type up and duplicate papers for my son’s teacher. She was thrilled to have this tedious job done by a parent. Then I joined the PTA and with other parents we were able to create a computer lab for the school. The plan was that each class was scheduled to come to the computer lab once a week for computer related studies. When my son’s class was scheduled to go to the lab, his teacher told me that she had no idea how computers worked thus if I wanted my son to be able to go to the lab, I would have to teach the class. Could I teach 25 kindergarten students how to type and operate Apple II C computers? How hard could this be? I figured if I stayed one step ahead of the students, I could teach this and I did.

By the time my son graduated from the 6th grade, I had run the computer lab and designed the curriculum for all grades Kindergarten through 6th grade. I now had 7 years of teaching experience. A couple of years later I was hired by the Santa Monica School district to teach at Grant Elementary School. They called me a “consultant” rather than a teacher because I did not have formal credentials. I ended up teaching 500 students a week, each class would come to the computer lab once a week for computer lab activities. In these 10 years I learned teaching skills on the job and real time experience.
Posted by Ana Petrova at 9:38 AM

Hah! I learn things about you all the time, Ana. I knew about the cosmetology school, but never knew that you taught so many eager children how to use their computers!!! wow!

You are fascinating. Keep telling us more.

You never cease to amaze...Bet ya didn't know I was a Judy Garland fanatic. Loved that story!

Wow you are amazing!!
What a wonderful, and adventurous story:)
It it my dream to combine knitting and teaching also, I am looking into getting my maters in Fibers/Textiles!

PS its Amanda (the youngest girl in ESSS:)