My elaborate naming system, early on when I started this blog and actually even before that I decided to name my projects so I would know which project friends were referring to. Then I really liked naming my projects and got into it. The names I give them are random whatever comes to mind. And sometimes I rename a project if the carefully picked out name does not fit the project.

It's sort of like naming a pet, and sometimes these projects take quite some time to complete and indeed become like a familiar friend. This project I originally called "Paprika" but it just did not seem the right bright red color that paprika comes to mind. So I have renamed it "Piros Bogár" which means Red Bug in Hungarian. The yarn that I'm making this sweater out of is named Bugga, because the dyers are taking their inspiration from colors of bugs this yarn color is named Horned Beetle.

Good progress I hope to finish this by October when I'm going to see Cat Bordhi on "her" island in Washington. She calls this get together a "floating retreat" and of course she has renamed it the "non-floating retreat" because we do not float. But I digress I will tell you all about this fun retreat up at Friday Harbor soon. 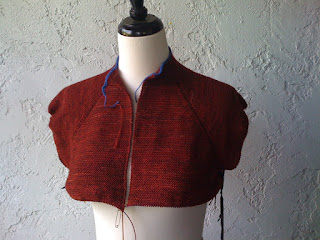 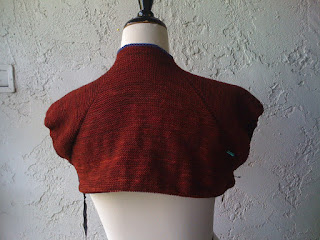 you know, how I love the English/American way of naming things like houses, patterns and such, like maning things making them come alive...
Cn't wait to see how would it turn out...