I have accepted a "commission"

When I was 18 and knitting myself a shawl my roommate's boyfriend saw me knitting and asked if I would knit him a sweater. At first I was complimented that this older sophisticated guy wants me to knit him a sweater. He must have been in his 30's. Then he offered to pay me for my efforts, wow I get to knit and get paid for it too! I love to knit so I said yes I'll knit you a sweater. Perhaps my ego took the better of me or maybe I was just naive or stupid.

We went to buy yarn and he picked out a sweater style he wanted. It was an Aran "fisherman" type of pullover. I remember thinking that this may be over my head but my ego and stupidity would not admit this. Lots of cables and lots of detail. Ok then I thought I love a challenge and I can learn how to knit this, how hard could this be?

I cast on and started and I figured it out how fun, cables and once the puzzle was solved my interest started to wane. The knitting slowed down and I realized that the amount of money he offered to pay me for my "efforts" amounted to about 2 cents an hour. My interest slowed to glacier speed and soon I would knit a row and put it down. I was 18 and busy with life I don't even like this guy and I'm stuck knitting this stupid sweater. I was in a pickle.

Once in a while he would ask about his sweater and months would go by and no progress. Finally I realized that I would have to "eat crow" and admit defeat so I offered to buy the yarn from him. The guy got very angry and refused to sell me his yarn and demanded that I finish his sweater. I'm paying for this and you promised "You start knitting right now!" he demanded.

Wow, nobody orders me around! You can't make me knit! To which he shouted at me "You are a woman and you must obey a man!" (He was from the Middle-East)

Are you out of your mind? Have you never heard of Women's Lib?

Up yours leave me alone!

So that did not go well and I remembered this episode and swore that I would NEVER take on a commission of knitting for anybody. Here it is decades later and I changed my golden rule! I've taken on a knitting job! Here is what happened.

I was dropping some charity knitting off at Stitches from the Heart and this lovely lady comes walking in asking for help with a heavy pullover she has. She would like to make it into a cardigan. She wants the pullover steeked! I've steeked before so I told her that I would be happy to show her what to do. She said that she doesn't know how to knit at all, oh.... oh..... the ladies at Stitches just looked with horror in their eyes steeking was something none of them even thought about doing. Until you have cut into a knitted piece and successfully altered something you really do not realize how simple it is.

The lady was so sweet and the next thing I knew I was willing to take a look at the project to see what could be done. We arranged to meet at the new Whole Foods Market in Venice. Here is the sweater. 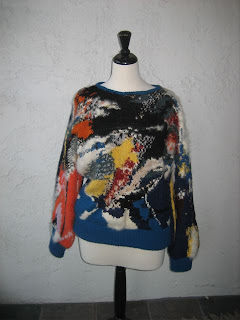 Well it's a challenge but I accepted and here is the progress. When I turned it inside out I realized how it was done! It's "intarsia" lots of little knots and ends a challenge all right. 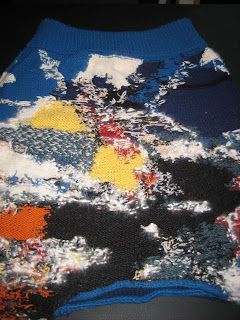 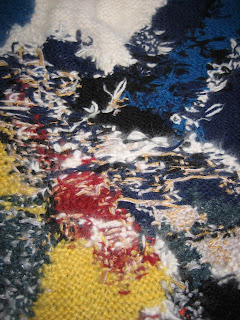 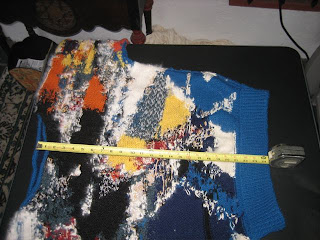 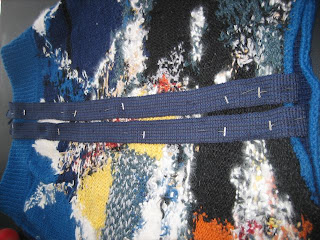 I found some yarn at Amano's that matched the sleeves pretty close so I knitted a sample to see how it would look. 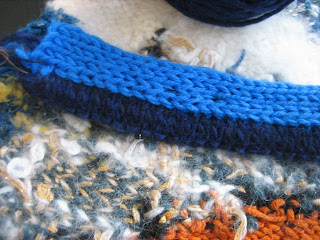 Progress to be continued!
Posted by Ana Petrova at 3:28 PM

You are a brave sole, Ana Banana! Best of luck to you. Looks like you have a pretty good start. That's one lucky lady that ran into you at Stitches!