Cars especially classic cars have fascinated me for many many years now. This last week I've been watching the Barrett-Jackson Collector Car Event in Scottsdale, Arizona. I so wanted to go but that is a lot of effort to get there and then to navigate the crowds etc. so the next best is to watch the event on television.

Just look at the site! You needed a golf cart to get around! One of the interviews I was watching talked about the auction producers ordering carpet by the acres. I was watching television and knitting most of last week. Thoroughly enjoying both! 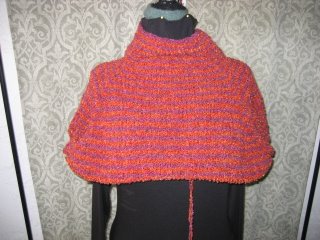 Knitting this top down sweater in stripes... fun because I can try it on as I knit along and the KnitPicks.com "Options" needles are absolutely perfect for this type of project. The various length of the cables is great! When I want to try it on I just switch to a 60" cable and am able to see what it looks like on.

On Saturday night my DH and I were sitting there watching the Auction absolutely blown away by the prices, $100,000.00 .... $500,000.00 and so on it was almost like seeing Monopoly money! Then my husband tells me that our friend Jim is there look for him in the background!

I say it's only high rollers that get to be on the "block" and to even sit in the audience you have to prove that you have at least $30,000 in you checking account and pay $200 for admission.

My husband: Jim Mangione told me to look for him he will be there!

Me: Yeah I'll look for him! (thinking sure I'll see him maybe for a split second)

My husband: Look there he is!

My husband: Look he is bidding on that car!

My husband: That is a very rare car! 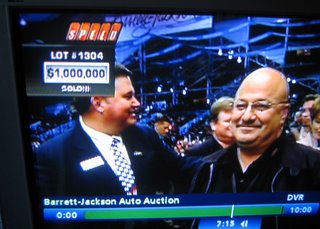 Wow that is something, wait there is another one:

The Dodge Firearrows were a grouping of four one-off concept/dream cars designed by Chrysler's legendary design chief Virgil Exner and built by Ghia of Turin, Italy. The series consisted of a full scale mockup (Firearrow I), THIS CAR Fire II a running, driving fully roadable car based on that mockup. Firearrow III a sport coupe, a further evolution of the earlier Firearrows and finally Firearrow IV, a fully roadable convertible with folding top, windows and fully designed and engineered to be translated into series production. Unfortunately, Chrysler made the decision to not proceed into production and these cars are but a great moment in automotive history. These cars are the only survivors of the wonderful early series of Chrysler concept cars that were designed as serious, elegant Italian styled sports cars which could very easily have found a market niche to compete with the Corvette, Thunderbird and several European marques. They not only are wonderful looking cars, but are powered by the legendary Hemi engine and a pleasure to drive.

About the Barrett-Jackson Auction History

What began as a simple meeting between two car buffs in 1960 has emerged over some 40 years into one of the world's most prestigious and anticipated collector car auctions and expositions.

It began in Scottsdale, Arizona a Wild-West town that had yet to spread its wings and create its own identity. The two participants were Russ Jackson and Tom Barrett, drawn together by a car advertised for sale. It seems Mr. Barrett was selling his 1933 Cadillac V-16 Town Car, and it appears Mr. Jackson was interested....

....It was in 1967 that Barrett and Jackson presented a car show they called, with the appropriate flair, "Fiesta del los Auto Elegance." ......

In 1971, the two combined their talents to present the first classic car auction, featuring classics from their individual collections. Barrett's Mercedes 770 Phaeton chiseled industry headlines, selling for $153,000 and grabbing the attention of collectors worldwide. The sale and the inaugural event thrust the Barrett-Jackson name into international prominence. ....

This year there must have been a record set look at this one: 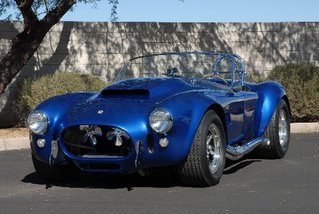 That's a lot of zero's

Oh Firebirds. I thought he was looking for Thunderbirds!

My DH and I happened to be in Pacific Grove last year just before all the fancy car auctions at Pebble Beach, Monterey and all the surrounding areas. I am not much of a car buff at all, but my goodness, it sure was exciting to watch all these gorgeous cars arriving in town. Huge tracks would haul them up to the display areas, and unload them one by one...like a parade. What fun it was!