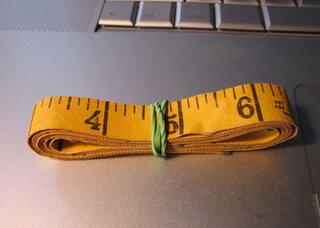 My sweet mother has been gone for over ten years now and especially during the holidays I miss her but every once in a while I get a sweet "hello" from her. I inherited all of mom's sewing and knitting things and buttons including her sewing basket etc. She told me once that she needed to sew something almost every day. Hems, and other alterations, she seldom sewed anything from "scratch" but did a lot of alterations. At the time I thought who has time for that ? ? ? Just buy things that fit (easy for me to say at the time a whopping size 3).

I'm not a size 3 any more! Now that I'm older and my body has shifted, I too am making alterations and sewing and custom knitting things the way I like them to fit. I guess I now seem to have more time and I actually enjoy this. Yes folks at some point it happened to me I've become just like my mother..... When I was young I protested this with fervor but now it's comforting.

Because she was European the tape measure was one of the things she had to get used to, yards instead of meters. Even though meters seems to be so much easier and more logical we had to get used the 12" a foot, 36" a yard etc. I've heard rumors that the U.S. was converting to meters but it was only a rumor.

The other day as I was working on my Christmas Hat I needed a tape measure so I would not end up with a top hat instead of the cap I was making. On my way out to the Farmer's market to meet Ellen Bloom "L.A. is My Beat" I grabbed a tape measure from the sewing basket. It looked a bit odd with the rubber band around it and I thought gee I don't remember putting a rubber band around this, but it was neat and fit in my bag so I grabbed it. 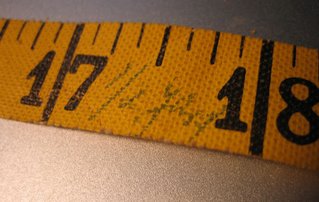 How sweet it is to see her handwriting, and to touch something that she used. I felt like she came and said a special little hello. Her memory stays with me and every once in a while I see something that reminds me of her. I carefully put the tape measure away so maybe one day I'll grab it again and have the same warm and fuzzy feeling .


Here is the hat almost finished. 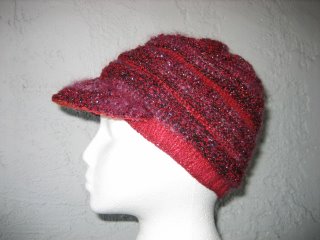 The hat is turning out beautifully. I didn't realize you were going to put a brim on the cap...very handy!

My mom leaves little reminders to me, too. The other day I was leafing through an old cookbook and out flew a recipee my mother had jotted down on the back of an evelope 40 years ago! I said: "Hi, Mom". I haven't seen her dear face for 18 years but everytime I knit, I think of my maternal line purling away through generations. Something soothing in that.

Very sweet. It is my Dad that I lost a few years ago. We have some of his tools and he leaves me little reminders as well. They always bring a smile to my face and a tear to my eye.

Love the cap - so cute with the brim.