The day was finally here, Tuesday May 26 @ 10:00 am we could sign up for our classes at the Sock Summit. We kept getting eMails from Stephanie (the Yarnharlot) and Tina (Blue Moon Fiber Arts) that they were ready for the thousands of people who will be logging on at the same time.
I am organized just like they told us to do choose more than first choices because it will sell out fast. I have my handwritten cheat sheet ready to go, but frustration I can't get in then I get in and at the last minute it kicks me out. 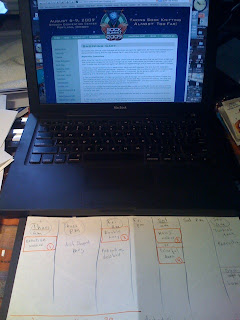 11,000 people tried and sure enough the server crashed! Stephanie told us that there are more knitters in the U.S. than golfers. Anybody I mention this to is always surprised and sort of acts like they don't believe me, like I'm making this up to bolster my crazy hobby.
Booo Hoooo we were all moaning and groaning. All the rules out the window! What do we do now? But I really, really want to take a class given by Barbara Walker. I love her books even though they may be dated a bit but a wealth of information and I love what I've heard about her. Quite frankly I thought she was so old by now and never coming out in public, but here she is on the list of classes at the Sock Summit
Calling my friend Joan my roommate, did you get in? No did you? Noooo .... another phone call .... refresh ... refresh. I got in oh but Barbara's class is sold out and Lucy Neatby's class is sold out. Cat Bordhi's class is sold out. I quickly go on Ravelry and check the "buzz" yup everybody is in the same boat.
But I hang in there, I went and did a load of laundry feeling all disappointed and then I think I should try it again. A Miracle! I got in and got Barbara Walker's class and got Lucy Neatby's class and I'm a happy camper. But now I have to wait until August.
Here is a little detail about Barbara Walker, I find her fascinating. Cat Bordhi told me that when she visited Barbara's studio the walls were lined with Barbie dolls. She did her designs first for a Barbie, a miniature sweater or skirt etc. Here is what the Wikipedia says about her.
From Wikipedia:

Barbara G. Walker (born July 2, 1930, in Philadelphia, Pennsylvania) is a U.S. author and feminist. She writes about religion, cultural anthropology, spirituality, and mythology from the viewpoint of Pre-Indo-European neolithic matriarchies. She often uses the imagery of the Mother Goddess to discuss these Neolithic Matriarchies. Her most important book is The Woman's Encyclopedia of Myths and Secrets (1983). She also is an influential knitting expert and the author of several classic encyclopedic knitting references.

Barbara G. Walker describes herself as an atheist. In the book, The Skeptical Feminist: Discovering the Virgin, Mother, and Crone, she writes about her belief that there is no deity. However, she believes that people, and woman in particular, can use the image of the Goddess in their day-to-day lives. Her book Woman's Rituals: A Sourcebookis an attempt to show how she puts her "meditation techniques" into practice, and is meant as a guide for other women to do the same thing.

In the 1960s and 1970s, she authored several volumes of knitting references which have become landmarks for their comprehensiveness and clarity.[citation needed] Her knitting treasury series documents over a thousand different knitting stitches. Other books considered mosaic knitting, for producing multicolored designs while knitting only one color per row, and constructing knitted garments from the top-down rather than the usual bottom-up method used in western knitting tradition. Her legacy continues with the reprinting of most of her knitting books, starting in the mid-1990s, as well as the publication of new contributions to the knitting literature.

Barbara G. Walker studied journalism at the University of Pennsylvania and began working for the Washington Star in Washington, D.C. While serving on a local hotline in the mid 1970s, helping battered women and pregnant teens, she became interested in feminism. The American Humanist Association named her "Humanist Heroine" in 1993, and in 1995 she received the "Women Making Herstory" award from the New Jersey NOW.