Age is whatever you think it is. You are as old as you think you are.
Muhammad Ali

He must have been awfully young when he said this! Now that I'm older I know that this is not true. Aging is just part of life and it really has nothing to do with wishful thinking, we should not be phobic about the time we have been on this earth but most people I meet are. Especially here in La La Land.

Many years ago when I was about 18 and worked as a hairdresser and I had a client her name was Alma. Alma was almost a 100 years old but she still had her hair done every week. She walked with a shillelagh (pronounced “shuh-LAY-lee”) walking cane and impeccably dressed with her pearls. Everything about Alma fascinated me and I especially loved the shilleagh and I used to admire it when she would hand it to me to put away while I was doing her hair.

I was the youngest in the beauty shop and some of the others had no patience so they gave her to me and I got to love Alma. I was totally fascinated with her age. And I think Alma enjoyed her visits with me as well. Each week her daughter who was in her eighties, would call me on the phone and I would come out to the front of the shop and help Alma get out of the car and bring her in the shop. We walked together she would hold my hand and we walked ever so slowly the world seem to slow down when she came to see me. It became a ritual once a week.

It was so hard for me at that young age to imagine what it would be like to be almost a 100 years old. Alma and I had wonderful visits and many great conversations she was very sharp. One day I was looking at her in the mirror with this wrinkled tiny old lady looking back at me and I asked her how it felt to be so old?

She looked into my eyes and yes there was this mischievous sparkle there and she said "you know I look in the mirror and I wonder what the hell I'm doing in this old body? The little girl never left."

have treasured that conversation and it is seared in my memory funny how some people just leave such an indelible impression on us and Alma was one of those people in my life I never forgot. 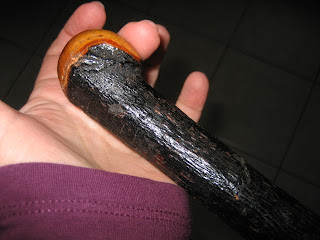 When she passed away she willed her shillelagh to me and she asked her daughter to bring it to me. I still have it and fondly remember Alma whenever I see it and hold it and thank goodness I don't need it to walk with. Maybe when I'm 100 I'll take it out and use it but it's always been around with me somewhere tucked in a corner and each time I glance at it I remember Alma. 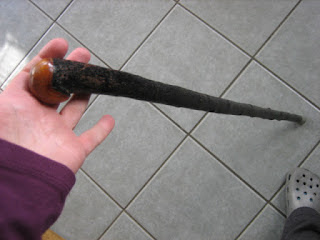 A shillelagh (pronounced “shuh-LAY-lee”) is a Gaelic war club (shown below) made of oak or blackthorn saplings from Ireland. Those are the only woods used because, it is said, they are the only ones tougher than an Irish skull.

"Typically made from a stout knotty stick with a large knob on the end, that is associated with Ireland in folklore. They are traditionally made from blackthorn (sloe) wood (Prunus spinosa) or oak. It was named after the Shillelagh forest in County Wicklow, a forest of oak which produced some fine examples. The wood would be smeared with butter and placed up a chimney to cure, giving the Shillelagh its typical black shiny appearance. Shillelaghs may be hollowed at the heavy "hitting" end and filled with molten lead to increase the weight beyond the typical two pounds; this sort of Shillelagh is known as a 'loaded stick'. They are commonly the length of a walking stick (distance from the floor to one's wrist with elbow slightly bent). Most also have a heavy knob for a handle which can be used for striking as well as parrying and disarming an opponent."

From Wikipedia: http://en.wikipedia.org/wiki/Shillelagh_%28weapon%29
Posted by Ana Petrova at 4:15 PM

What a lovely remembrance. Thank you!

A great heart-warming story about Alma and her shillelagh. I can just envision Alma from the picture you paint of her. She obviously treasured you too, since she thought enough to will you her shillelagh. Very sweet. It' remarkable the way we touch one another's lives.

How sweet. I admit, I'm often puzzled by our country's obsession on youth. You can learn SO much from the older generation. That was a lovely gift she left you.

What a beautiful memory!