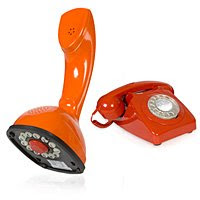 I find this terribly funny and practical. I recently switched our cable connection from Times Warner to Verizon. It's a so called "package" so my land line telephone was involved. I have been bombarded with "spam" phone calls and was terribly mad at this phone number we had at the house. It seemed every shady contractor would call on a daily basis asking if we had any repairs we were planning to do at our house. Because they were in our area and they would come to our house for free and give us an estimate. Sure I'll invite some total stranger into my house to look around! But each day the phone would ring and I would try many different creative ways to stop it. Oh yes I was on the do not call list but it did not matter. I would sometimes engage in conversation with them, sometimes silly and other times asking them nicely to remove me from your list because I will NEVER let them in my house. But the calls kept on coming especially during dinner.

Change the phone number and this problem will be solved! So I thought. I now was getting a new set of calls but once I put the phone number up at the do not call list, it seemed to stop. There was another problem! This new phone number we got even though it was the easiest number of the choices I had, I could not remember. I tried to write it several times, post it on the refrigerator, repeat it etc. Nope it would not stick in my old brain. It seems that my capacity of storing phone numbers has exceeded it's storage space. But I can remember this old phone number I used to have about 40 years ago. I can recite that number with no problem at all.

So just for fun I thought I would dial that number and see who had it. It was not in service! Does that mean that it's up for grabs? I called Verizon and asked if I could change my new phone number to this old phone number I used to have? Success! I now have a new old phone number I can remember.