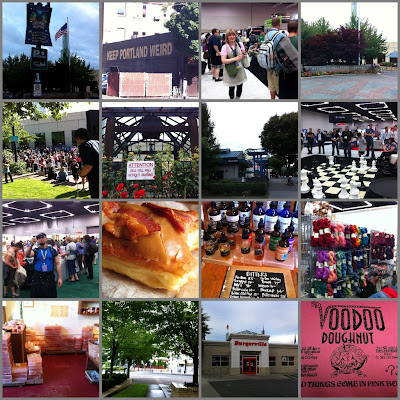 I have not posted for a while simply because I've been so very busy. I went to Portland, Oregon to the second Sock Summit. I had such a magical time two years ago I just had to go again. This time it was great even though not quite the same as last time but a wonderful time was had by all.
On the way home my son picked me up at the airport and as he was driving he asked what I did up there? I answered: "I was in a flash mob"
Son: Flash Mob mom? Really?
Me: Yup a flash mob!
Son: Did you and five of your friends get together and jump up and down and called it a flash mob?
Me: That is not a bad idea but no honey me and 600 of my fellow sock knitters got together and jumped up and down.
Son: Oh NO
Me: Oh Yes and I have pictures!

Took some classes with Judith McKenzie and Franklin Habit. Both teachers were great and I learned a couple of new tricks, totally enjoyed each class I took. Spinning with Judith is truly magical, she is so relaxed and so full of knowledge that I could just sit and hang out with her for hours on end. Franklin was very organized and was well prepared with nice hand outs and samples. In my opinion that is important if you are paying money for a class the teacher best be prepared. The knitters are a tough and opinionated bunch.
Lots of "window" shopping at the market place. I did not buy much but really enjoyed looking at all the wonderful wares and chit chatting with the vendors.

Then there was the Fleece to Foot race, a bit silly but fun to watch. Yes they actually brought in sheep to shear and then spun the wool and knit the sock.
Probably much more but this is all I can think of to share with you. Clara Parkes did a wonderful job of writing about details of the Sock Summit read it here.
Posted by Ana Petrova at 6:34 AM