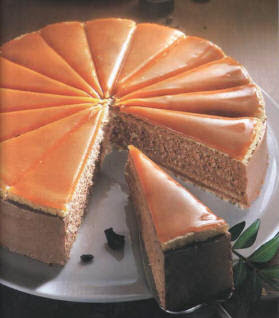 How did we ever manage before the Internet? Searching for something must have taken me endless amounts of time. I've always been an "instant gratification" sort of person and now I can even get up in the middle of the night and buy something, look up something, the latest news and the list is endless.

My latest search is this, my dear husband is having a birthday in a few days and he has requested a "Dobos Torta" for his birthday cake. I'm not the greatest baker, mind you I could be but I'm far too fat for that, (I love what I bake and would be eating myself to oblivion) so baking this cake is out of the question. 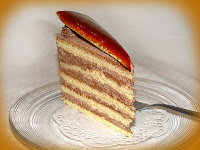 This cake is too tedious and for me to even attept it and too difficult, even in Hungary only the most dedicated make their own. Best when professionally done. If you don't believe me take a look at one version of the recipe translated from a Hungarian.

Now where to find it?

Dobos torta is a traditional Hungarian many layered cake with melted hard sugar/caramel topping. I'm not sure how many layers is the "official" count but it varies from 4 or 8, most of the time I've only seen the 8 layer version. Vanilla sponge cake lathered in chocolate butter cream... oh I can just feel the pounds adding on even just writing about it. It is very delicious but rich. When done well it is Divine but it can be very dry if not fresh.

I just "googled" it and found all kinds of leads even a discussion http://www.chowhound.com/topics/354833

And there is Otto's Famous Deli in Burbank, California.
Alpine Village, and the hunt goes on....

Now I've done it too too much information there are so many variations of this very famous pastry cake that it boggles the mind. Funny how somethings just catch on ..... Tune in again if you are curious about what I find in the Los Angeles area.

And here is a story I found about the history of this cake which I've never thought about but now this little tid bit lives in my brain. You see what I mean about the web now this story may or may not be accurate but it was entertaining for me. I'm easily entertained what can I tell you.

History of the Dobos Torte:

Joszef Dobos was the Auguste Escoffier of Hungary, creating his culinary extravaganzas during the same period as the French master. And like Escoffier, his name became known well beyond his country's borders.

Dobos came from a family of cooks. He prided himself on the quality and variety of his offerings at his fancy-food shop, which catered to the well heeled. In time when shipping was expensive and unreliable, he offered more then sixty cheeses and twenty-two champagnes. Budapest loved big World's Fair-like exhibitions, which of course, gave the citizens ample opportunity to sample their other favorite indulgences, food and wine. In 1885, at the first General National Exhibition, Dobos had a pavilion selling his delicacies. His most famous customers were the emperor and empress themselves (also styled king and queen of Hungary), who heartily approved of their meal. Elizabeth was unpopular in Vienna for promoting Hungarian independence, which, of course, made her a heroine in Budapest, so her endorsement of Dobos's products ensured his position as a super-chef.

A few years later, Dobos introduced his most famous invention, the Dobos torta. The amazingly thin cake layers and caramel crown were impressive indeed, but it was the cake's profuse use of chocolate buttercream -- a recipe only recently imported from France -- that literally put Dobos torta on everyone's lips. Dobos devised a special package that allowed the cake to be shipped, and soon the cake appeared in other European capitals. Of course, other Budapest bakeries wanted the recipe so they could sell their own version, but Dobos shrewdly kept it a secret -- for a time. During the 1896 Millenium Exposition, celebrating one thousand years of Hungarian nationality, Dobos opened another pavilion, selling thousands and thousands of his cakes. Dobos torta mania had taken hold.

When Dobos finally retired in 1906, he made a well-publicized gift of the recipe to the Budapest Trade Association, preserving it (and his name) for prosperity. The legend was further enhanced by an operetta detailing Dobo's intrigues.

By coincidence, dob in Hungarian means "drum". As the caramel-glazed top of a Dobos torte looks somewhat like the stretched skin of a drum, some sources mistakenly believe that the name of the cake is derived from dob. Could his choice of a hard caramel topping have been intentional? After all, could his surname come from dob, as well?

More recipe links:
http://www.dianasdesserts.com
This one looks kind of weak but it claims to be a Kosher recipe.
Posted by Ana Petrova at 6:03 AM

So?
I'm on pins and needles! Where did you find the perfect cake!?!!
Will there be leftovers?