My Christmas present from my son.

A few years back my husband gave me a flashlight as a surprise gift and it was so bright it almost reached the moon on a dark night. Ok maybe not the moon but it was really, really bright. I loved my flash light, I used it all the time and showed it to friends and relatives. They all looked at my flash light with amazement! Wow that is really a bright flash light! They would remark, I even took it to my monthly police department meetings to compare it to the cop’s bright flashlight they carry. Oh you should have seen us like little kids comparing our flashlights to see who had the brightest.

One day my son came to me asking to borrow my flashlight, I hesitated. He saw that he needed to up the ante so he started to tell me that he was going fishing and early in the morning when it was still dark sometimes there were Bobcats around and if he had a bright flash light such as the one I had, it could save his life. He would flash the light in the Bobcat’s eyes this would blind it then he could run away. Well in that case here let me get a fresh battery for it and take it, DO NOT FORGET TO TAKE MY FLASHLIGHT!

As you probably have guessed that flashlight got misplaced and then my birthday was coming up and I got a new flashlight. I don’t know how many times we have repeated this dance, once I misplaced the flashlight myself then my husband borrowed my flashlight so to make a long story short here is my brand new flashlight I got for Christmas. The only difference is this flashlight is MINE! Do not ask to borrow it because it will only work in my hands!

Here is my Streamlight PackMate BuckMasters 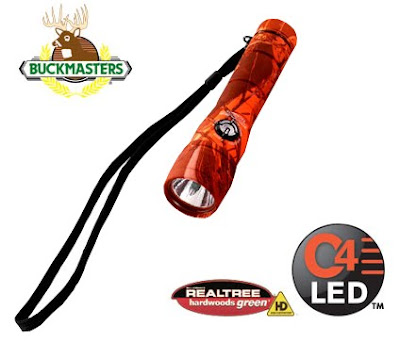