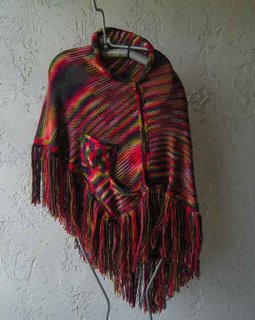 I've been hand knitting most of my life. About 3 years ago I decided that maybe I should look into machine knitting I thought it would boost the speed of my work. One of the women I know who knits for a living used a machine at least to partially knit her garments and it seemed like a fun thing to get into. I knit continental style which goes pretty fast but once in a while I think I just could knit something really fast, so a machine seemed to be just the thing.

So I researched and ended up deciding on the Bulky knitting machine, which supposed to be able to knit with hand knitting weight yarn so I purchased a Brother KH260 on Ebay. This is a machine they do not make anymore I guess the interest is just not there. Although I belong to a couple of discussion groups and there is whole machine knitting community out there in the world. Machine Knitters Unite!

Now I had my machine and had no idea what to do with it, then I heard about a class Tricia Shafer was giving so I signed up. It was great! I learned how to cast on, how to decrease and how to increase and finally cast off. About one and a half hours of instructions and I actually made a child's hat! I loved it.

So I got home immediately set up my machine with my son's help and sat down and cast on all the needles! (I don't know what I was thinking?) Then I passed the carriage and promptly all the stitches fell off. My son is in the background snickering at me. Ok maybe I should do fewer than 100 stitches. So this time I cast on 50 stitches. Passed the carriage and shish one more time all the stitches fell off. I'm not sure what I was doing wrong but my son was laughing at me by now. So I think maybe I should cast on 25 stitches, same result. I really wanted to prove to him that I learned how to do this, I just knit this great hat!

Fine I'll start with 3 stitches and increase on up. Yes! that worked! So I started increasing one stitch at each end and when all the needles were used I cast off. Now my son took a look and said "What is it? A wind sock?". Well I'll show you, I started to fold it this way, fold it that way and Voila! A pancho! Now it needed some edging so I crochet fringes to weigh it down so it would not curl so much (the machine only knits stockinette stitches), then I decided that it needed pockets for my cell phone etc.

And there is my first machine knitted project! I love my Bulky but there is lots to learn.
Posted by Ana Petrova at 7:44 AM