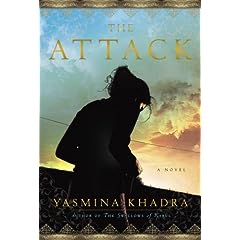 I just finished reading "The Attack" by Yasmina Khadra and it deals with the suicide bombings that is so unbelievable to understand at least from my perspective. I found it extremely interesting, the whole subject boggles my mind.

I listened to it from an Audible download, I just love listening to books on "tape" while knitting. Sometimes it is just too difficult for me to read especially in the evenings. Yes "old" age limits my eyesight, getting older is definately not for "wussies" but I digress that is a subject for another blog entry.

I really liked this book, the subject is not pleasant but it gave me some insight to this whole subject a little glimmer of understanding. How could this be? How in the world would anybody think that this is the only way to express their desparation, anger and hurt by hurting others? I just don't get it.

This is what The New Yorker wrote about the book.

Dr. Amin Jaafari, an Israeli Arab, seems fully assimilated into Tel Aviv society, with a loving wife, a successful career as a surgeon, and numerous Jewish friends. But after a restaurant bombing kills nineteen people, and it becomes apparent that his wife was the bomber, he plunges into the world of Islamic extremism, trying to understand how he missed signs of her intentions. Khadra (the nom de plume of Mohammed Moulessehoul) vividly captures Jaafari's anguish and his anger at the fanatics who recruited his wife. The Israelis don't escape lightly, either, as their army marches over law-abiding Arab citizens in an attempt to stamp out the militants. Khadra's writing has a tendency toward cliché, but the book's dark vision of the conflict is powerful.

Links:
Amazon
Audible
An interesting article:The Psychology Behind Suicide Bombings
The Advice Goddess mentions this very subject: Lack Of Civilization And Its Discontent
Posted by Ana Petrova at 8:46 AM

I was also confused about this subject until i saw the movie, The Battle of Algiers. In it the intellectuals of that guerrilla movement answered the question. They said that they would love to use guided missils but no one would sell them to them...

Our culture has sanitized war so that bombing hundreds if not thousands of people from high altitudes is more 'civilized' than blowing oneself up. Until we renounce all violence, who is to say which form of violence is more acceptable than another??

You are brave to seek more answers.

Deborah....two wrongs do not make a right.

It is a very complex issue I wish I had the answers.