Lost in the Magical world of Moebii ....

I am knitting Moebii, that may not be the proper name for plural of Moebius but that is what I'm calling it, because it's like potato chips I can't just make one. It's such a fun knit and like Cat Bordhi says it is truly Magical. Cat has written a couple of books on the Moebius and if you have ever met Cat she is ... well to quote Stephanie Pearl-McPhee the "Yarnharlot" :

...I've met a whole bunch of people that have met or spoken to Cat Bordhi, and not one of them was lead to believe that the woman was a danger to herself or others, and no one has suggested that she is the adult child of an alien experiment, no one used the phrase "one skein short of a sweater" and nobody even vaguely suggested that we should form a petition to take her pointy sticks from her.

That's why, having started Cat's thrummed mobius Wednesday night, I am surprised to discover that Cat is absolutely out of her ever-loving mind. Brilliant, clever, genius likely....but make no mistake. That woman does not think like an ordinary person. I think she melted a small part of my brain with her pattern......

Yes knitting a Mobius is catchy, now I'm coming up with all kinds of new ways to knit this clever and fun project. I'm teaching a class tonight and will be teaching it on the Knit with Color Cruise next October. Here is the class description:

Introduction to the Magical World of Moebius knitting. Once you create one you will want to do it again and again. You’ll be able to step outside the box and let your imagination soar. In this class Ana teaches how to cast on a Moebius project without the tedious chores of knitting a gauge or counting stitches. Ana will teach her simple but clever way to cast on and also take the mystery out of how big will my finished circle be?

Yes NO GAUGE SWATCH or NO COUNTING STITCHES! What a relief to cast on and just be able to knit for the pleasure of knitting while creating something that is truly your own original design. “Stitch Bingo” is what Ana calls it. It It is a fun way to make up your own stitches and patterns. No more following instructions or charts line by line. You will be able to let yourself enjoy the process and enter the magical "knitting zone”, or being in the "flow" a form of meditation.

If you like to knit a guage and follow a pattern and can't take my class Cat has a free pattern on her web site:
http://www.catbordhi.com/documents/CashmereCowl.pdf 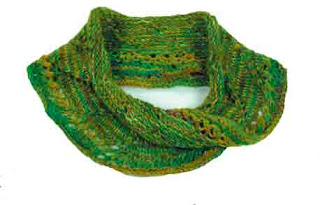 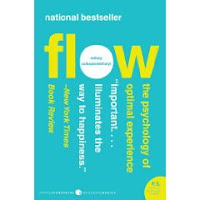 Flow is the mental state of operation in which the person is fully immersed in what he or she is doing by a feeling of energized focus, full involvement, and success in the process of the activity. Proposed by Mihály Csíkszentmihályi, the positive psychology concept has been widely referenced across a variety of fields.[1]
According to Csíkszentmihályi, flow is completely focused motivation. It is a single-minded immersion and represents perhaps the ultimate in harnessing the emotions in the service of performing and learning. In flow the emotions are not just contained and channeled, but positive, energized, and aligned with the task at hand. To be caught in the ennui of depression or the agitation of anxiety is to be barred from flow. It is the same mindfulness as ecstatic lovemaking, the merging of two into a fluidly harmonious one. The hallmark of flow is a feeling of spontaneous joy, even rapture, while performing a task.[2]